Bank of America ("BOA or the Bank"), the 2nd largest Bank in the US by asset size, has exceeded its earnings expectation and reported a net income of USD3.53 billion in Q2 2020. However, the net revenues reported for Q2 2020 is USD22.5 billion, barely edged out analysts' estimates of USD22 billion. Net income of the Consumer Banking segment is reported at USD71 million in the 2Q 2020, which has drastically declined from USD1.8 billion recorded in Q1 2020. Federal Governments' emergency rate reductions have curbed the Bank's net interest income. The Bank has reported a net interest income of USD10.85 billion in Q2 2020, which has declined from its previous quarter as well as last year's period value. However, the non-interest income has increased and reported an income of USD11.48 billion compared to USD10.64 billion in Q1 2020 and USD10.90 billion in Q2 2020. Net interest yield rate stood at 1.87% in Q2 2020 compared to 2.33% in Q1 2020. The Bank has maintained a provision of USD5.12 billion for credit losses in Q2 2020.

BOA is feeling the effects of COVID-19 more acutely as its business is more consumer-focused. The plunge in “real” economic activity” and “actual” economic value of BOA has placed downward pressure on the Bank's consumer banking segment, which is tied to the health and financials of millions of American consumers and borrowers. Hence, BOA is considered as the most sensitive of the large banks by analysts when it comes to fluctuation in interest rates.

Let us get a detailed view of its earnings. 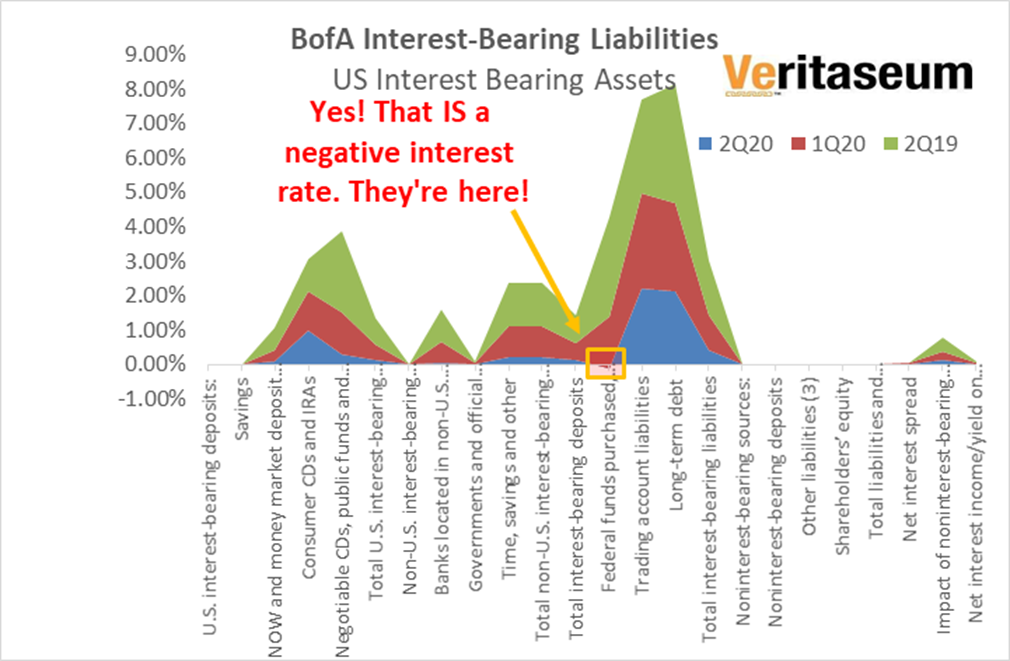 Bank of America is, in real time, refuting the erroneous assumption that inter-bank interest rates cannot go below zero because a lender would prefer to hold on to its money and receive no return rather than pay someone to borrow the money. This may be true for uncollateralized loans, but a lender may be willing to pay interest if the securities offered as collateral on a loan allow it to meet a delivery obligation (D’Avolio 2002; Jones and Lamont 2002), i.e. treasuries or certain equities. These are the treasury FTDs (fail-to-delivers) for the month of June. Which bank do you think is proximal to these FTDs on the 11th of June? 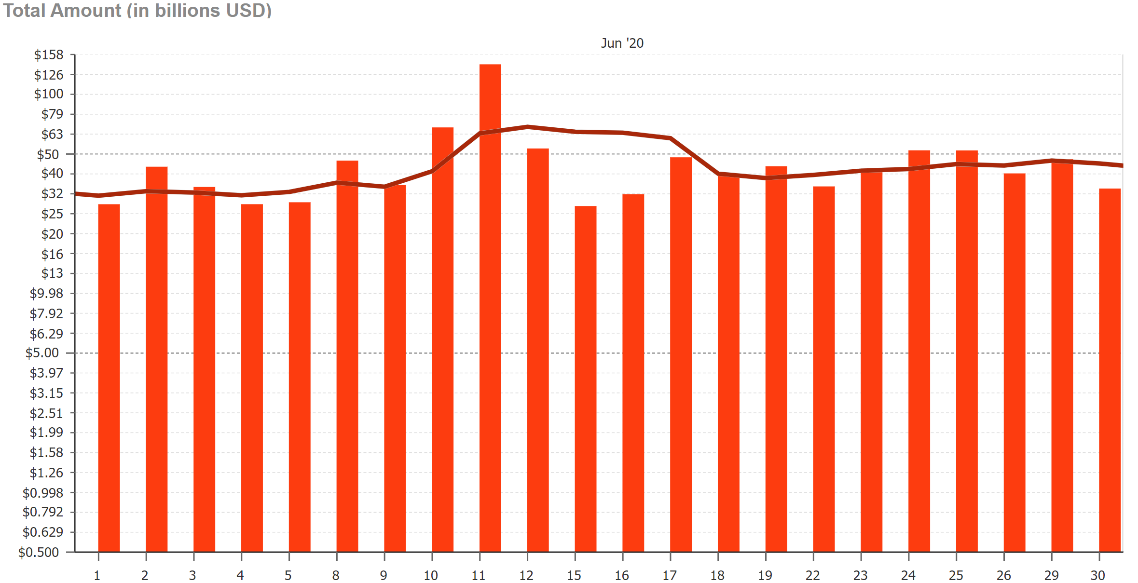 Credit exposure is the measurement of the maximum potential loss to a lender if the borrower defaults on payment. It is a calculated risk to doing business as a bank. The global pandemic has significantly affected industries, resulting in lost revenues and disrupted supply chains on account of lockdown measures and there residual effects. Industries such as real-estate, retailing, consumer services, food beverage and tobacco, transportation, consumer durables and apparels, vehicle dealers and automobile and components are highly susceptible due to lockdowns and restriction measures. BOA has a significant amount of credit exposures to these sectors.

BOA reported total non-performing loans of USD4.4 billion in Q2 2020 compared to NPLs of USD4.2 billion in Q2 2019. The Bank’s NPLs has increased with an increase in the NPLs of commercial loans.

Total NPLs in the consumer loan segment has declined in Q2 2020 and reached USD2.2 billion from USD3.0 billion in Q2 2019. The NPLs declined primarily because of a decline in NPLs of home equity loans as the Bank has charged-off a significant portion of loans during the one-year period.

The above data is as reported in BofA’s earnings release. But if we delve in, we can see a completely different picture of the delinquency rates of credit cards. The actual, economic delinquency rates have a considerable difference than the reported one.

On March 16th 2020, BOA enacted the Client Assistance Program where it offers assistance to 66 million consumers and small business clients in response to the unprecedented challenges of COVID-19, allowing the clients to defer payments. BOA has processed approximately 1.8 million total deferrals, and as of July 9th, the Bank still has 1.7 million deferrals. The deferrals represent USD29.8 billion of consumer balances.

The US economy has been experiencing a significant and unprecedent material slowdown over the past few quarters due to the global pandemic, COVID-19 in combination with the deflation of a drawn out bubble that’s been blowing for over a decade. The pandemic has affected businesses with lost revenue and disrupted supply chains on account of lockdown measures. Industries such as Retailing, Consumer Services, Food Beverage and Tobacco, Transportations etc. are the worst affected and are highly susceptible. BOA has a significant amount of credit exposures in these sectors, signifying a huge impact on its earnings.

However, BOA in its Q2 2020 earnings has surpassed the earnings expectations and reported a net income of USD3.5 billion. The Bank's Consumer banking segment was hugely affected by the emergency interest rate cuts by the Federal Government and reported a net income of USD71 million. The Bank has reported USD11.5 billion non-interest income which has increased in this quarter primarily because of an increase in underwriting income and financial advisory services. However, the ROE and the net interest margin of BOA has declined in Q2 2020.

BOA has a provisioned 72% of its pre-provision GAAP earnings for credit losses in Q2 2020. The Bank's liquidity position has improved from the previous quarter and stood at USD2,776 billion. The Bank's NPLs were reported at USD4.4 billion.

The Bank's delinquency rates have declined and have reported a delinquency rate of 1.7% in Q2 2020. This is mainly because the Bank has enacted the Client Assistance Program under which it has allowed its clients to defer payments and excluded the total deferral amount of USD29.8 billion. Although this may adhere to GAAP (generally accepted accounting principles) guidelines, it is tantamount to prestidigitation and misdirection. This provides a misleading picture of the Bank’s financials. When we add back the amount set under the program, the delinquency rate increases to 37.06%. This indicates a big wave of defaults expected to come in the next few quarters, of which BofA is woefully under-provisioned for. Although BofA is in particularly bad shape in the is regard, it is not alone. JP Morgan, the largest bank in the US by assets, and arguably one of the better managed banks, is in the exact same predicament, using the exact same parlour tricks to hide the credit quality damage to tis balance sheet. Reference “Analysis of JP Morgan's Terrible, Horrible, No Good 2nd Quarter of 2020 - Why Am I the Only One?”