Surprise fall in unemployment rates in the US – A closer look 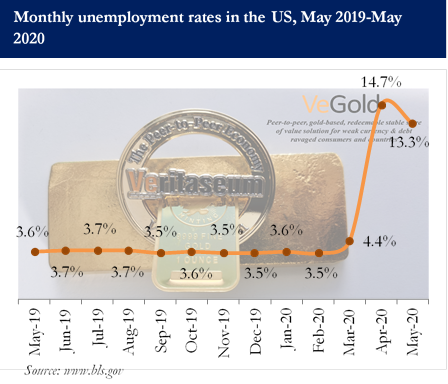 While many economists and analysts predicted the rates to go up and as far as 20%, the decline in the rates was highly unexpected.5th of June, 2020 brought in a surprising piece of news for the US economy – the unemployment rates were down to 13.3% in May 2020, compared to the 14.75% recorded in April 2020, as the economy added 2.5 million jobs to its pocket.

Total nonfarm payroll employment increased by 2.5 million in May 2020. The improvements in the labor market reflected a limited renewal of economic activity that had been curtailed in March and April due to the coronavirus (COVID-19) pandemic and efforts to contain it.

In May 2020, employment rose sharply in leisure and hospitality, construction, education and health services, and retail trade. By contrast, employment in the government sector continued to decline sharply.

The May-2020 job gain is suggestive of the fact that thousands of stores, gyms, restaurants, and several other companies reopened and rehired more quickly than many analysts had forecast.

Highlights of the PPP scheme

Key guidelines of the PPP scheme

At least 75% of the PPP loan must be used to fund payroll and employee benefit costs. The remaining 25% can be spent on, 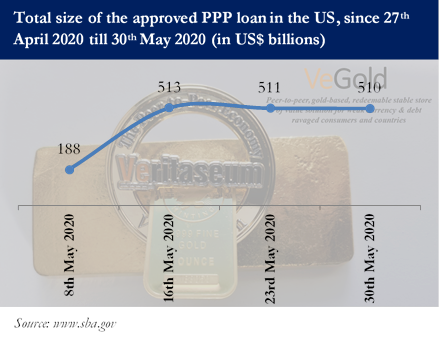 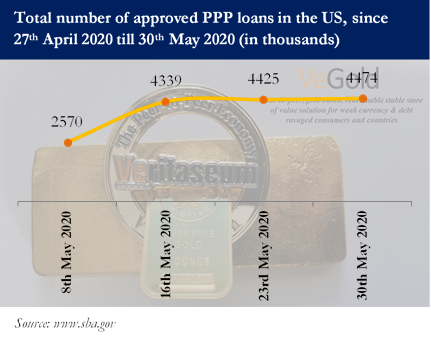 The PPP scheme rolled in by the US government through the Coronavirus Aid, Relief, and Economic Security Act (CARES Act), provided the much-needed cash injection into the US economy.

However, the rate of the loan approvals in the current package seems to have slowed down as the funds start to dry up. Though the financial impetus helped in regaining 2.5 million jobs in the month of May 2020, it should be noted that the unemployment rate in the country is still much above the mark of 10%, which the country faced during the times of the Great Recession. Thus, there still exists a huge number of Americans waiting to get employed. This is not even the bad news!

What created the gap in the expected rate and the actual rate of unemployment in May 2020?

By the 16th of May, 2020, more than 38 million Americans filed unemployment claims, which implied an unemployment rate of 20%. This number was several million more than that filed at the end of April. However, the trend changed as the stimulus package rolled in, and some of those workers who had previously filed unemployment claims started going back to work. Notably, the fiscal stimulus package (PPP) statutorily has to be consumed within eight weeks (although an extension may have been recently signed).

What do the real economic numbers look like, ex-stimulus?

The average US worker makes US$69,181 per year or US$5,765 per month. We’re using the average number because the median number would skew lower and the salary cap for PPP reimbursement is US$100k – allowing higher-paid employees to max out at US$100k. By taking the two months (PPP) limit of the average annual salary, we can reasonably guess the number of jobs in the recent past payroll report directly and entirely funded by the American taxpayer. That 2.5 million job gain was actually a 9.8 million job loss if the taxpayer-funded bailout was not considered. Why leave this out? Because:

The financial help, once dried up, might lead to the second wave of the rise in unemployment rates, adding much to the worries of the already struggling economy. Hence, if the economy is to rebound strongly, then stimulus of a higher magnitude is of utmost necessity. However, the question that persists is how feasible it is for a consistent and constant fiscal stimulus to be funded by US taxpayers – the same taxpayers receiving the stimulus! Therein lies the conundrum, the US must rob Peter to pay Paul! In other parlance, this is known as a Ponzi scheme.

Panic-Driven Monetary Inflation and It's Effect on Digital Gold