After posting an article on stagflation yesterday, I noticed that many were in disagreement on what inflation actually amounted to in the real world. Further, many were unaware of what digital gold actually was. I fear they may have been confused by the term "digital". Thus, today we will review the rampant inflation that we are encountering the US (and world-wide) and the effects that it is having on digital gold. But first, let's be clear on nomenclature and semantics, through a glossary of sorts...

What is Monetary Inflation?
Monetary inflation is a sustained increase in the money supply of a country (or currency area, i.e.the EU). The generally accepted economic,definition of inflation is a sustained increase in the general price level of goods and services in an economy over a period of time. What many fail to conceptualize is that the price level of sand goods and services are cast in that country's (or currency area's) currency. Thus, it is really a push and pull dynamic that determines these prices. The push is the amount of actual currency that is in the economy, which is the most sensitive determinant of prices (since, in modern times,money can be electronically printed in hours, if not minutes). If you have $100,000 USD, backed by exactly 100,000 units of GDP, (let's assume 1 unit of GDP = $1 at this time) and there is $1,000,000 in existence. I, the Mr. Central Banker, while in full PANIC mode, adds 49% to the money supply (100% inflation, annualized). Let there be no misunderstand. the Fed literally added IN EXCESS of 49% of the total dollars outstanding to the USD supply since COVID started - November of 2019!

So, I as the Fed banker, adds $490,000 more USD to the system and generously (you know, like in the PPP bailout schema and IRS stimulus checks) give you $7k of it. How much richer are you, economically? Let's do the simple math. You go from $1 in 2019 dollars to $0.67 + the PPP/IRS stimulus payment (let's add .$.007 for that).  That is the most rapid, most steep, most destructive jump in monetary inflation in the history of this country. That's ~100% inflation, annualized Zimbabwe had 161% inflation in 2019. We're catching up!
Now, that $1M home you were looking to buy now costs $1.4M, and the owners of that home really feel wealthier. The problem is that they are wealthier in the drastically devalued USD. Economically, they would be the same - give or take a couple of percentage points... Except.... That house didn't go up in price at all.It went down in price. Why?

Prices are going down. This is deflation, and it is the reason why the Fed is pumping so much money into the economy, debasing the dollar. Inflation combined with deflation leads to the stagflation that we discussed yesterday on Zerohedge.

What is Tokenized (Advanced Digital) Gold?
Digital Gold: Gold that is identified in digital form. This is opposed to gold that is identified in analog form. For example, when you purchase gold from a gold dealer and issued a paper receipt for said gold, it is analog. When you purchase gold from a dealer and you are issued a digital receipt (i.e.a blockchain-based token) it is digital. If the digital token is structured properly (i.e. carefully tokenized), it gives you all of the benefits of a traditional purchase, plus all of the benefits of the Internet, the blockchain and the programmability of the smart contracts (i.e. autonomous loans denominated in hard currency). One of the biggest misconceptions of digital gold is that of counterparty risk, basically, "If you don't have it, it's not yours!". Here's a 10-second tutorial on how to alleviate that misconception with VeGold, one of the better implementations of digital gold (disclaimer: I am affiliated with the proprietor of this system)..

This can be done immediately after you buy the metals (just like a traditional purchase) or next month, next year, in three years, etc. Unlike traditional dealers, you can buy and sell fractional units of gold, as little as $0.40 (forty cents) worth, and transfer that small amount for as little as 4 cents. Properly constructed tokenized gold is literally title to the physical gold, deliverable on demand. It can also be held in bearer form, and freely transferred to others within seconds.

You can also easily send and/or receive your gold tokens to anyone with an Internet connection, in any amount, within seconds and for mere pennies.

These tokens that are digitally sent or received can also be redeemed for physical gold, upon demand, simply by following the steps above (after KYC, of course). This represents a colossal evolution in how physical gold is bought, sold, sent, received and traded.

Find out more about VeGold here.

Now, that we're all caught up, let's jump in. 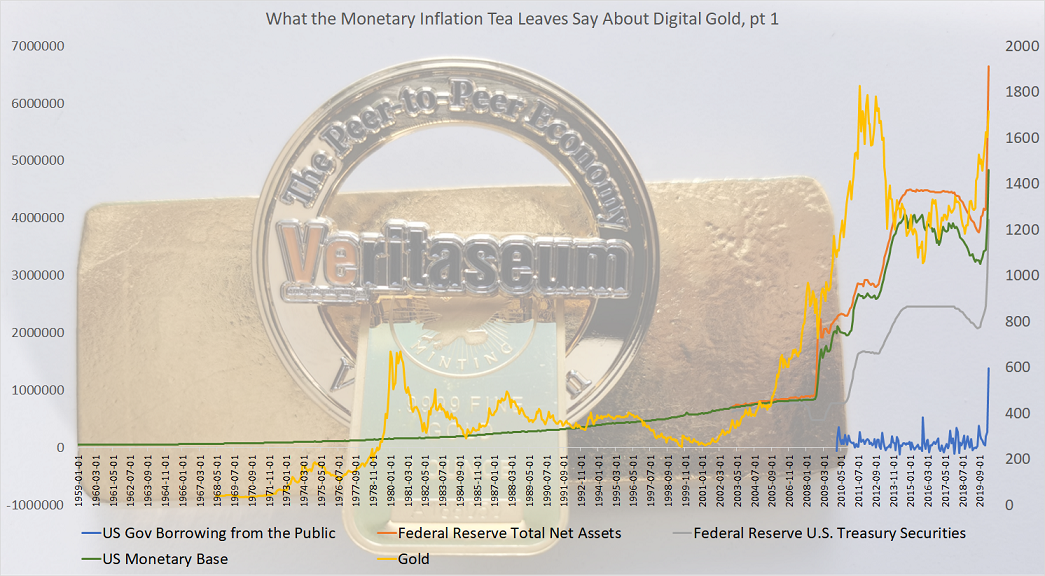 This chart is the base of the entire argument of holding gold as an currency reserve. First, look at the trend of each component/line.

This is the chart,blown up to focus on just the COVID-19 period. 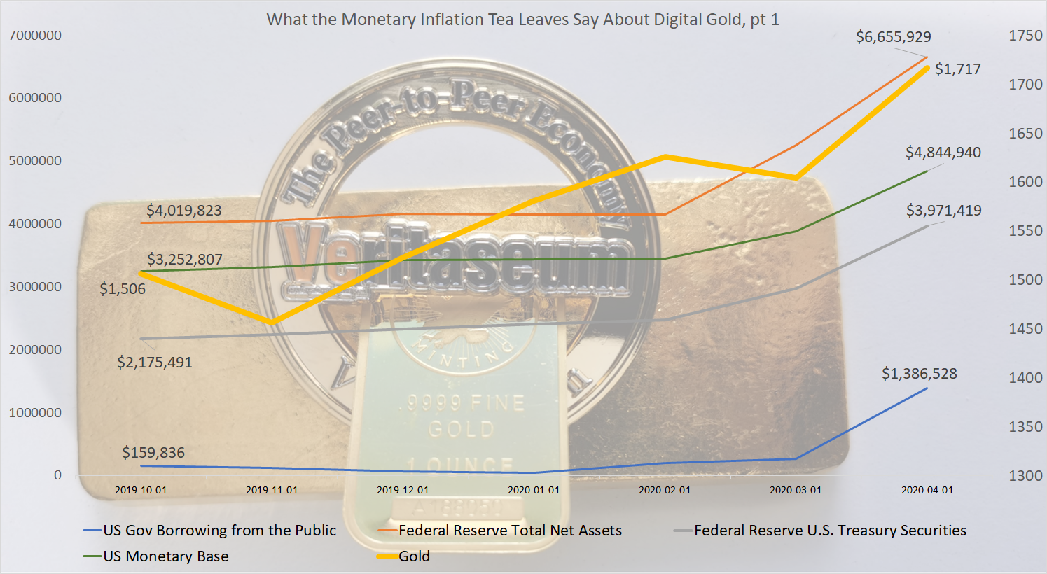 You guessed correctly, the printing of US currency. The monetary base in the US has increased by $1,592,133,000,000, or a whopping ‬49% - in less than 6 months! That doesn't even tell the whole story. You see, the Fed has been busy buying a lot more than just treasuries. It has bought ETF shares, mortgage backed securities, swapsi issued, etc. It's total asset side of its balance sheet has grown $2,636,106,000,000, again, over a period of less than six months. Money needs to be printed to fund that additional $1.8T worth of "other stuff" the Fed has been stuffing into it's knapsack.

What does this mean for gold when priced in rapidly inflating dollars? Well, over that same 6 month period, gold has climbed 16%, and the money debasement/inflation is literally just getting started.

Let's look at the price of VeGold (tokenized gold) in various sovereign fiat and crypto currencies.

Learn more about VeGold here. Read our indepth report on the truly stable purchasing power of VeGold across all currencies here. Purchase your own VeGold here (find the product you want, then clock "open").

U.S. Department of the Treasury. Fiscal Service, Means of Financing: Borrowing from the Public [MTSMFBP133FMS], retrieved from FRED, Federal Reserve Bank of St. Louis; https://fred.stlouisfed.org/series/MTSMFBP133FMS, May 20, 2020.

Release: H.3 Aggregate Reserves of Depository Institutions and the Monetary Base

Board of Governors of the Federal Reserve System (US), Monetary Base; Total [BOGMBASE], retrieved from FRED, Federal Reserve Bank of St. Louis; https://fred.stlouisfed.org/series/BOGMBASE, May 20, 2020.

H.3 Aggregate Reserves of Depository Institutions and the Monetary Base