As many know Veritaseum has recently offered its own software token for sale. Unlike most other token offerings, Veritaseum is offering its token as a literal product - both as a vehicle to access their advisory and consulting services and as the keys to access its existing and future blockchain-based software products. We are much more anxious to release tokens as a product than a potential investment, because we are so excited about the possibilities now available through smart contract and blockchain technology.

We feel we can offer our constituents significantly more value in doing things through our tokens versus having them invest in the promise of something getting done via the token. Let me show you from a historical perspectives.

Here’s a timeline leading up to where we are now...

Most of the popular token offerings have several things in common:

Veritaseum tokens, Veritas, are marketed as specific software solutions to specific problems, and not as investments. We feel the solutions to the problems that we address are significantly more valuable than any potential financial investment return alone. The first product to be released on the Ethereum blockchain will be our interactive, dynamic research platform. Traditional research consists of papers, PDFs and charts, with an occasional phone call for the very well-heeled clients. Most importantly, it is mostly wrong or uninspiring regurgitation of management’s proclamations, with not unique or independent investigation. Veritaseum research is real, in depth forensic analysis and adaptive valuation that the customer actually experiences and participates in, not reads. It’s delivered through smart contract, and it acts upon its own recommendation, giving the customer the ability to follow along via Veritas tokens.

As a matter of fact, from an economic value-added perspective, our solutions have an economic return that is potentially greater than the historical financial ROIs of the most popular and successful token offerings to date.

Those who invested in bitcoin at its inception and held on enjoyed 1,450% return. That’s good! It blows out the 600% (QE/NIRP bubble powered) returns of the broad US equity markets. Bitcoin’s utilitarian value has been limited, though, and despite this it still soared! We differentiate these values here at Veritaseum. Bitcoin is (relatively, among other cryptocurrencies) widespread, allowing it to enjoy significant economic network value. Its technical platform value is significant in comparison what many fiat currencies currently ride, but... 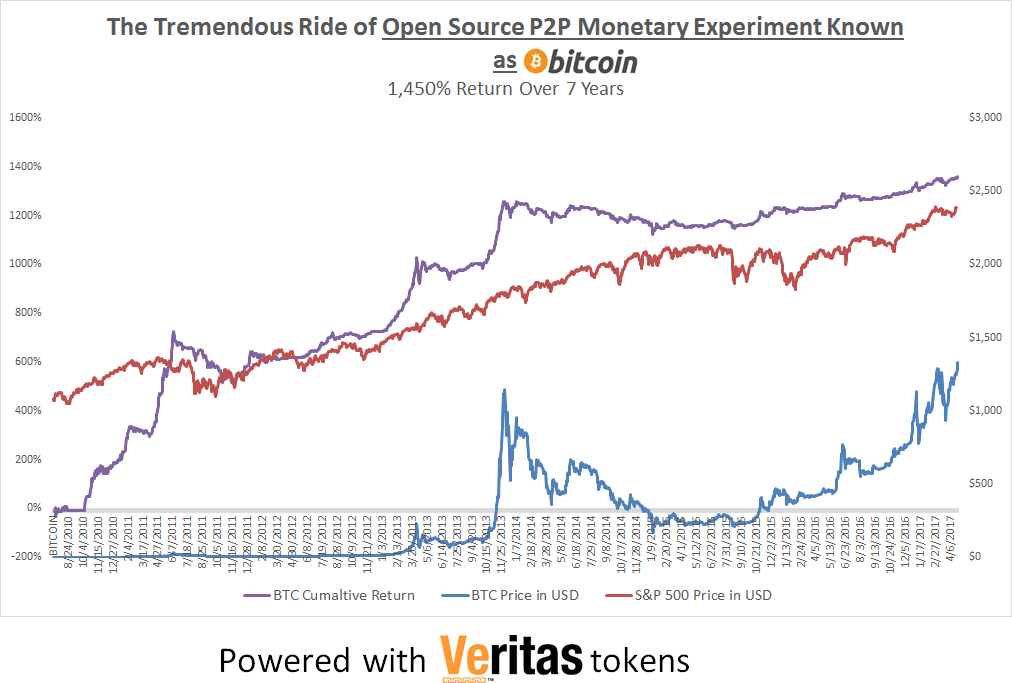 It is paled by smaller, yet more nimble (due to a more streamlined governance system) competitors for mindshare such as Ethereum and Dash. Both of these platforms have actually outperformed bitcoin in ROI, and have done so in a shorter amount of time than bitcoin’s ascendance to the 4 digit return realm.

Dash is a digital currency system, primarily designed around remittances and payments, that answers many of bitcoin’s original shortcomings, but introduces others of its own (nothing’s perfect).

Ethereum is a world computer that allows users to run “unstoppable applications” as smart contracts on a decentralized network. Again, it's not without its problems either, but we at Veritaseum, have launched our token off of this platform - transferring our apps and from the Bitcoin blockchain to Ethereum’s, but still maintaining exposure to the Bitcoin network through network bridges.

Both Ethereum and Dash have significant network utility value (greater than that of Bitcoin’s) but pale compared to bitcoin in economic network value. Interestingly enough, they are gaining on Bitcoin in terms of network effect while Bitcoin is closing the gap on them in terms of utility value. 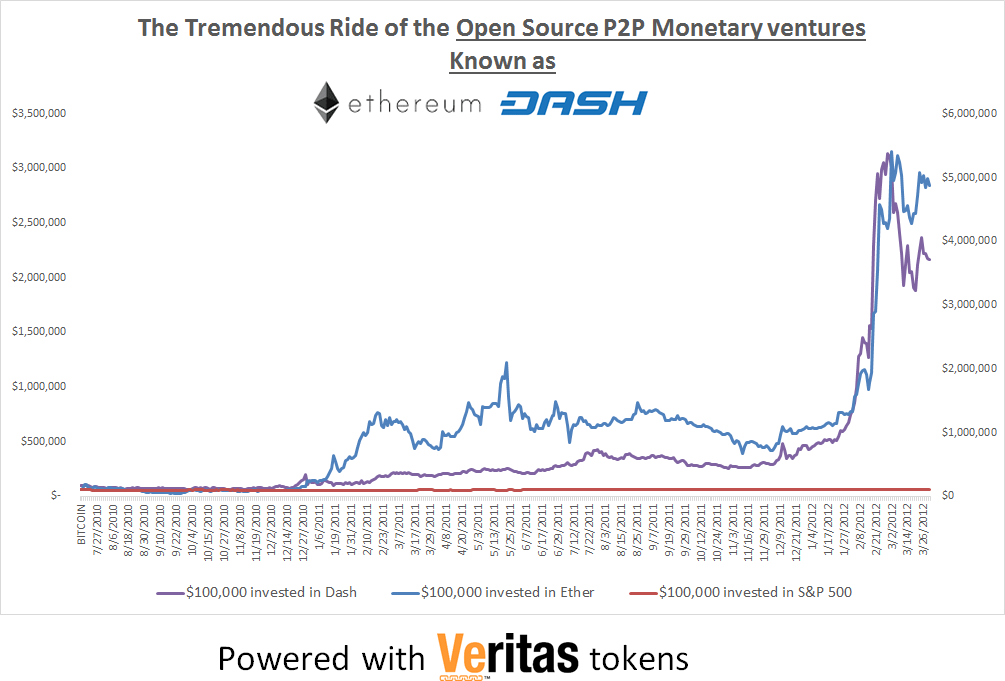 We believe that Veritaseum and its Veritas tokens offer the best of both worlds, riding the network effect of the widespread bitcoin network, and harnessing the adaptive power of Ethereum’s smart contracts engine. Other differences come into play as well. Veritaseum seeks to maximize economic profits, not just the value of the token for actual or potential investors. This portends different operating strategies, but at the end of the day, if you produce a superior product and it's recognized by your constituency, then the recognition is manifested in a higher token price (supply and demand). Of course, if you immune to the vagaries of revenues and profits, then you can potentially have divergence of interests between majority token holders who solely want tokens to increase in value (even if that increase comes at the price of volatility) and average customers who benefit from stable token values and even more from significant utility values.

Veritaseum’s hybrid approach makes sure the users of the app comes first, and their significant satisfaction practically guarantees higher token values (not just speculative price, but actual value) because the tokens are needed to use the products and services. Even though this is true to some extent with the token value-only compensation model, it can can lead to some nasty conflicts (ie. volatility, pushing for early trading pops, etc.).

We feel the greater bridge to utility that Veritaseum brings to knowledge is at least as strong a value add as that offered by Ether and Bitcoin, arguably more in many cases for Veritaseum is an end user's tool while many others are development platforms. Veritas can be put to use immediately, by anyone, anywhere, for any amount and for practically any amount of time.

Assuming those that have knowledge and those that pursue knowledge cross that bridge to greater understanding that is Veritas and it rivals that of Ethereum, today’s roughly $3.30 purchase of VERI tokens could yield ($3.30 x 5,000%=) $165, Now, the question is… If we do achieve such, did we drive that number from actual utility value in the use of our product or speculative activity? I will let you be the judge of that as we release our first bit of interactive forensic research (research that, itself goes long or short a digital asset) on Gnosis (GNO) over the upcoming weeks. Of course you will need Veritas to access the financial machines that enable this. For those who have never seen our research or its results, look at our recommendations to short Blackberry and go long Google (these are two of about 86 calls over the last 10 years, which includes nearly every major bank failure in the US and the largest real estate market crashes and REIT bankruptcies).

I personally believe this is but a footnote in the story of evolutionary value exchange. Unlike most other token offerings, we are not positioning Veritas as financial investment opportunity, we are positioning it as a bridge to greater understanding in finance and investment, the ultimate fintech vehicle.

The Veritas Tear Sheet & Summary  is now available for download, which packs all the information about Veritas in to a single page.

A step by step guide to purchasing Veritas can be found here.